This time I’d like to touch on a few more advanced topics related to GitLab CI. The common theme here is implementing custom features within your pipeline. Again, most of the tips are specific to GitLab, but some could be easily applied in other CI systems as well.

Checking your code with unit tests is usually easy to plug into any CI system. It usually is as simple as running one command built in your language’s toolset. In these tests, you will most likely use various mocks and stubs to hide implementation details and focus on testing particular logic. For example, you can use in-memory database as storage or write stub HTTP clients that always return some prepared payloads.

However, eventually, you will need to run integration tests to cover more unusual test cases. I don’t want to start a discussion on all possible test types here, so let me say this: by integration tests I mean tests that use some sort of external resource. This can be a real database server, an HTTP service, attachable storage, and so on.

GitLab makes it trivial to run attached resources as Docker containers, linked with the container running your scripts. You can use the services keyword to define these dependencies. They will be accessible by their image name or your chosen name if you specify it in the alias field.

This is a simple example of using an attached MySQL container:

In that case, you have to connect to the db hostname in your test scripts. Using an alias is usually a good idea, as you can switch the images without changing the test code. For example, you could change mysql image with mariadb and the script would still run correctly.

Because attached containers can take a while to warm up, you will probably need to wait before sending any requests. A simple way to do this is by using wait-for-it.sh script with a specified timeout.

Using services should be good enough for most of your use cases. However, sometimes you need the external services to communicate with each other. One example may be running Kafka and ZooKeeper in two separate containers (the official images are built this way). Another is running tests with a dynamic number of nodes, like selenium. For running services like this, a better solution is to use Docker Compose.

If you’re running your own GitLab runners on a trusted server, you can use Shell executor to run Docker Compose.
Another option may be using Docker in Docker (dind) container. Read this first, though.

One way of using Compose is to set up the environment, run tests and tear it down. A simple bash script would look like this:

This solution is fine as long as your tests can run in a minimal environment. It may happen though, that you will need some dependencies installed. There is another way of running tests in Docker Compose that lets you built your own docker image with the test environment. You make one of the containers run the tests and exit with proper code.

Notice that we got rid of the ports mapping. In this example, tests can communicate directly with all services.

Tests can now be executed with a single command:

The --exit-code-from option implies --abort-on-container-exit, which means the whole environment started by docker-compose up will be stopped after one of the containers exits. The exit code of that command will be equal to the exit code of the chosen service (tests in the example above). So if the command running your tests exits with a non-zero code, the whole docker-compose up command will exit with this code.

A word of warning: this is rather an unusual idea, but one I’ve found very useful and flexible. As you probably know, GitLab has Labels feature on project and group levels. Labels can be attached to issues and merge requests. They have no relation to the pipelines, though. 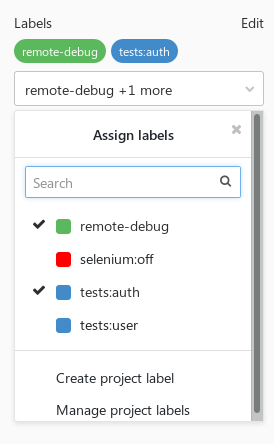 With a bit of hacking, you can access the merge request labels in the job scripts. As of GitLab 11.6, this is now even easier, as there is a CI_MERGE_REQUEST_IID environment variable (yes, it’s IID, not ID) available if your pipeline is using only: merge_requests.

If you’re not using only: merge_requests or running an older version of GitLab, you can still get the MR with an API call.

iid is the field you’re after. Just be aware that this could return multiple MRs for a given commit.

When you get the MR IID, all that’s left is to call the Merge Requests API and use the labels field from the response.

Sadly, using $CI_JOB_TOKEN to access project’s API is not possible at the moment (at least unless the project is public). If your project has restricted access (internal or private), you will need to generate a personal API token to authorize with the GitLab API. 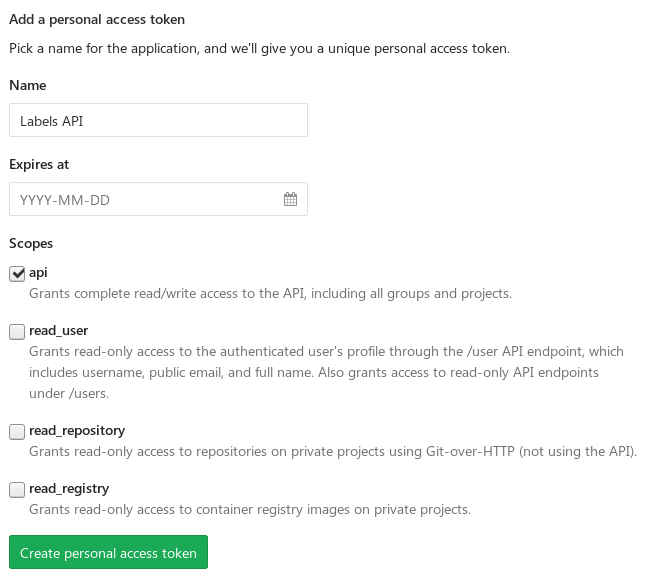 This is not the most secure solution, though, so be careful. If this token would be leaked, someone could gain write access to all of your projects. One way of reducing the risk is to create a separate account with read-only access to the repository and generate a personal token for this account.

How safe are your variables?

A few versions ago, the Variables section has been called Secret Variables, which could sound like they were designed to store credentials and sensitive data safe. Frankly, the variables are just hidden from users who don’t have Maintainer permissions. They are not encrypted on disk and can be easily leaked as environment variables in your scripts.

Keep it in mind when adding any variables and consider storing your secrets in safer solutions (e.g. HashiCorp’s Vault).

It’s now up to you to decide what to do with the list of labels. Some ideas:

While GitLab comes with a suite of included features, it’s very likely you still use other tools that could be integrated with your pipelines. The simplest way to do it is of course by good old curl calls.

If you’re writing your own tools, you could also have it listen to GitLab’s Webhooks (look up the Integrations tab in the project’s settings). If you’d use it with some critical systems though, make sure they are highly-available.

If you’re using Grafana, annotations are a nice way of marking on graphs an event that happened in time. While it’s possible to add them by clicking in the GUI, they can also be added by the Grafana REST API.

You will need to generate an API Key to access the API. Consider creating a dedicated user with restricted access.

To keep it re-usable, you can put the script in the common scripts repository:

Now call it with proper parameters in the CI definition:

You could also put it in the deploy.sh script to keep the CI definition even simpler.

GitLab has a great documentation on all possible keywords in the CI definition. I don’t want to duplicate the content here, but I’d like to point out a few useful use cases. Click on the headers to view the docs.

Use pattern matching on variables to enable custom builds for some of the branches. You don’t want to overuse it, but if you quickly need to push a hotfix, this might help.

GitLab includes a lot of predefined variables in each CI job, make use of them.

Use them to avoid duplication.

Since 11.3 you can also use the extends keyword.

By default, all artifacts built in the pipeline will be passed to all following jobs. You can save some time and disk space by explicitly listing artifacts the jobs depends on:

Alternatively, skip them entirely if none are required:

Skip cloning the repository if the job won’t use its files.

For more GitLab tips, check out my previous posts: